During her 50-year career, actress Pam Grier has portrayed powerful women and is the queen of 1970s blaxploitation films, including Coffy, Foxy Brown and Sheba, Baby.

Grier discussed her film career during a question-and-answer session with Rollins College history professor Julian Chambliss and fans after the Jackie Brown screening during the Florida Film Festival at the Enzian Theater. 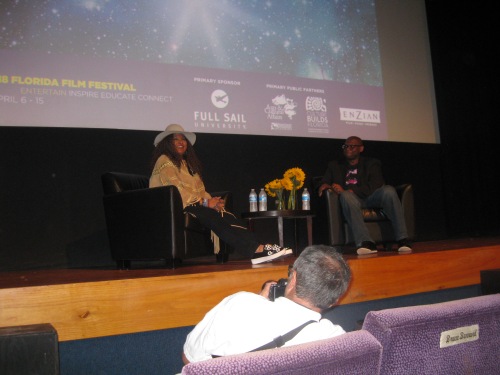 She portrayed the title character in the crime thriller Jackie Brown, written and directed by Quentin Tarantino, which he wrote for Grier and is a love letter to her career. The film is about a sexy flight attendant who orchestrates a scheme to keep smuggled cash from an arms dealer. The movie pays homage to blaxploitation films and is an adaptation of Elmore Leonard’s novel Rum Punch. 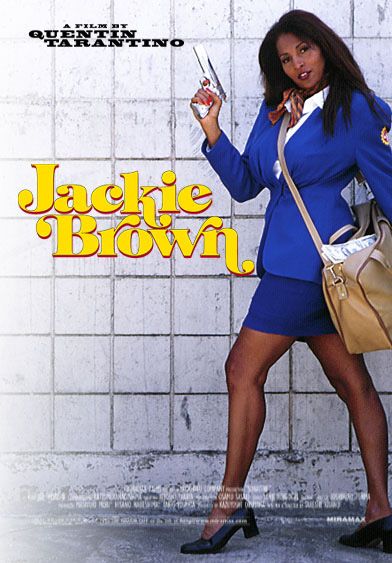 When Grier first met Tarantino, she noticed his office walls were decorated with five framed posters of her films.

“These were original posters that are worth thousands of dollars,” she said. “It was humbling and made my heart race knowing that someone really liked my work. It was that moment of reality for someone who is an artist.”

Grier informed the audience that if you don’t rehearse, then you don’t get to work with Tarantino. She said she was always ready, knew her lines and credited her theater background for preparing her for the role. Grier also said she cooked meals for the cast and crew who sang and danced to tunes since Tarantino played music on the set.

I had an opportunity to ask Grier about her chemistry with the film’s cast. She provided a hilarious assumption about Brown and Ordell Robbie’s past. 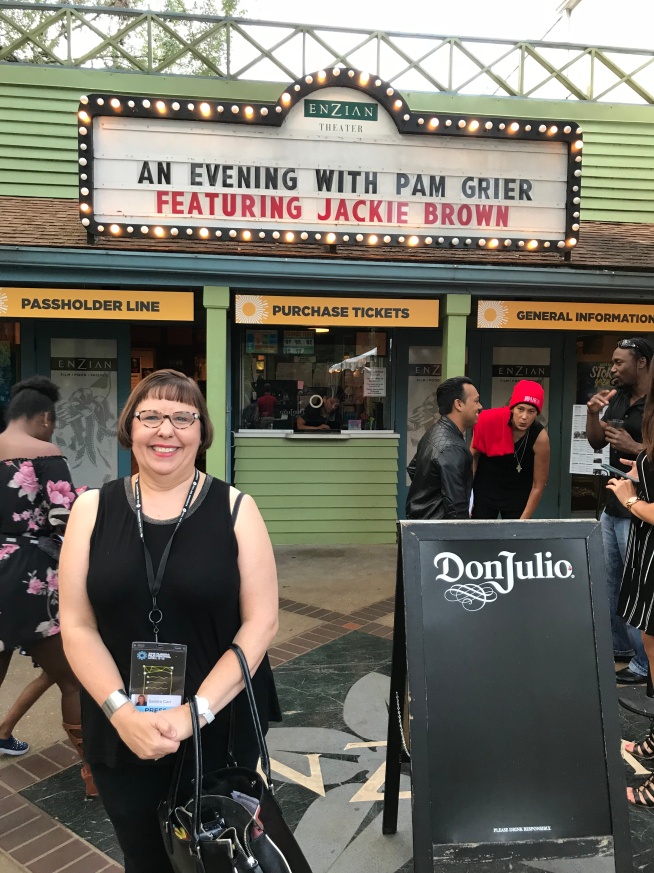 “Quentin, why would this man (Robbie who was portrayed by Samuel L. Jackson) walk into my apartment and turn out my lights? Did we have sex before? He feels like he can walk into my apartment and turn off the lights. Does he pay the power bill? Did we have a relationship before? I think we tried it one night and it didn’t work. We were awkward. I felt that. We became friends after that and we didn’t talk about him not being able to get it up. Maybe my nipples didn’t get hard. I don’t know! You all have been there before! I thought it was going to be hot, but it wasn’t. If we’re going to have sex, then don’t put a ring on your gotee! That’s going to hurt and cause blisters!” 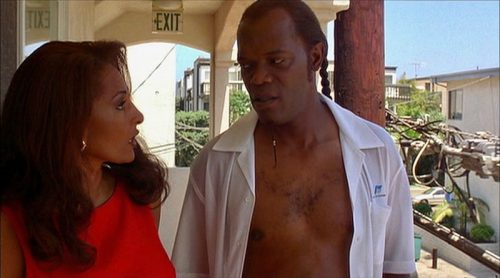 Grier also came up with the line “Booya! With a cherry on top!” during the scene where Brown leaves a shopping bag filled with cash underneath a fitting room door for Melanie Ralston (Bridget Fonda) to pick up.

In the action film Above the Law, she portrayed Chicago Police Department narcotics detective Nico Toscani’s (Steven Seagal) friend and partner Delores ‘Jacks’ Jackson. Grier was diagnosed with cervical cancer the same year the film was released and is in remission.

She enjoyed filming Bad Grandmas with actress Florence Henderson. She said Henderson was very funny and didn’t act like she was in her 80s. The movie was Henderson’s last before she passed away in Nov. 2016.

Grier also portrayed Lily in Rose, a film about a woman who finds love while soul searching throughout the southwest during her final days. The movie also stars Cybill Shepherd and James Brolin.

Besides films, Grier has appeared on TV sitcoms, including Miami Vice as Valerie Gordon, a New York Police Department detective who had an on-again, off-again relationship with Ricardo “Rico” Tubbs (Philip Michael Thomas) and The L Word as Kit Porter.

She shared some funny anecdotes during her Q&A, including hanging out with John Lennon and Harry Nilsson during a Smothers Brothers concert at the Troubadour in Hollywood, Calif back in March of 1974. Lennon started singing a song and asked Grier if she knew it. The song was I Can’t Stand the Rain by Ann Peebles. Grier sang the song and Lennon hit the table like he was playing the drums. Lennon got everyone to sing while harmonizing and becoming intoxicated.

When the Smothers Brothers came on stage, Lennon thought they were boring and wanted to continue singing the song with Grier. The Troubadour’s manager asked him to be quiet. That didn’t last very long. He started singing again and the manager attempted to remove him by grabbing his collar and pulling him over the table. A fight broke out between Lennon, Nilsson and the manager. The group, including Grier, were tossed out of the club and sat on the curve while providing the Los Angeles Police Department with their accounts of the incident. Afterwards, Lennon sent Grier flowers and thanked her for not hitting him. 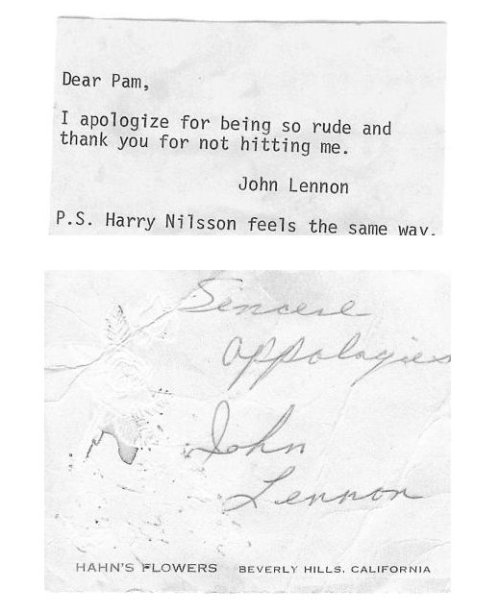 Grier was raped by two boys when she was 6 years old and again as a teenager. She said the incidences have affected her during her acting career. She recalled having a flashback of being raped when her and Thomas were filming a romantic scene for Miami Vice. She needed an hour to compose herself along with talking to Thomas about interacting with her differently during the scene.

She discussed her relationships with comedian Richard Pryor, actor Freddie Prinze and retired NFL basketball player Kareem Abdul-Jabbar and why they didn’t work out.

“These stars were reaching their pinnacle and becoming very powerful,” she said. “I was the target of possibly being their mate, wife and mother of their children. It was blocking my trajectory of being an independent woman. I didn’t want to thrive in their spotlight and lose my identity.  I loved them dearly, but I chose myself more and it was my time. I disbanded the relationships because I really wanted to be on my own.” 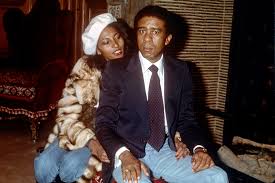 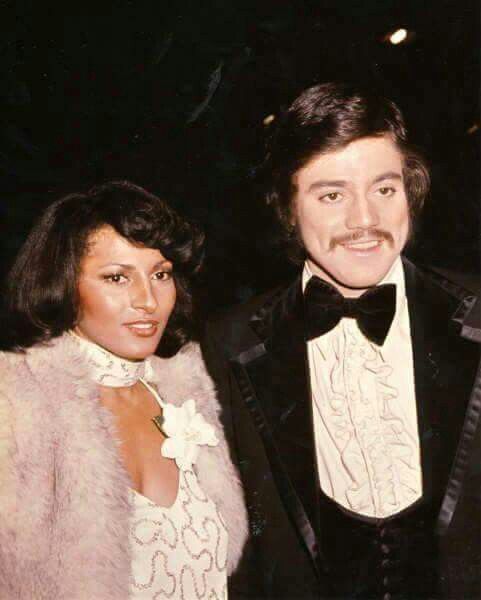 Grier talked about Pryor and shared a humorous and almost tragic moment that occurred with the stand-up comic’s miniature horse.

“Richard’s dogs attacked his miniature horse Ginger, which was a gift from Burt Sugarman and the name is based on the Mudbone folklore (Mudbone was a recurring character in Richard Pryor’s stand-up comedy act),” she said. “I put the miniature horse in the back of my four-door Jaguar and we took it to the vet. We’re rolling down the 405 with the miniature horse’s head hanging out the window and Richard is in his bathrobe crying about what happened. We saved the miniature horse’s life and got it home. Richard then found out that I loved horses and thought he could lure me with horses. I knew if the miniature horse had died, then he would have fallen off of the wagon. Richard’s wife Jennifer Lee said in his Showtime documentary that I was the one person who had a positive effect on his life. I realized that he would fall and I didn’t want him to take me down with him. I’m a great nurse and caregiver, but you have to meet me half way. I can only carry you so far before my back breaks.”

Her grandfather Daddy Ray was the first feminist in her life and taught her how to hunt, fish and shoot guns. She brought those experiences with her while portraying different characters throughout her acting career.

Grier also said young people introduce her to their dads and uncles. The men ask her if she shoots all of the guns in her movies. Grier lets them know that she has a gun collection, including hunting rifles from her grandfather, a gun that Steven Seagal gave her after filming Above the Law and another gun from Miami Vice.

She’s comical in her response to the men’s inquiries about her firearms.

“Their eyes get big and I tell them not to worry about my guns,” she said. “You just need to worry about my Sears Craftsman chainsaw! If I smell cologne or see lipstick when you come in, then you’re in trouble!” 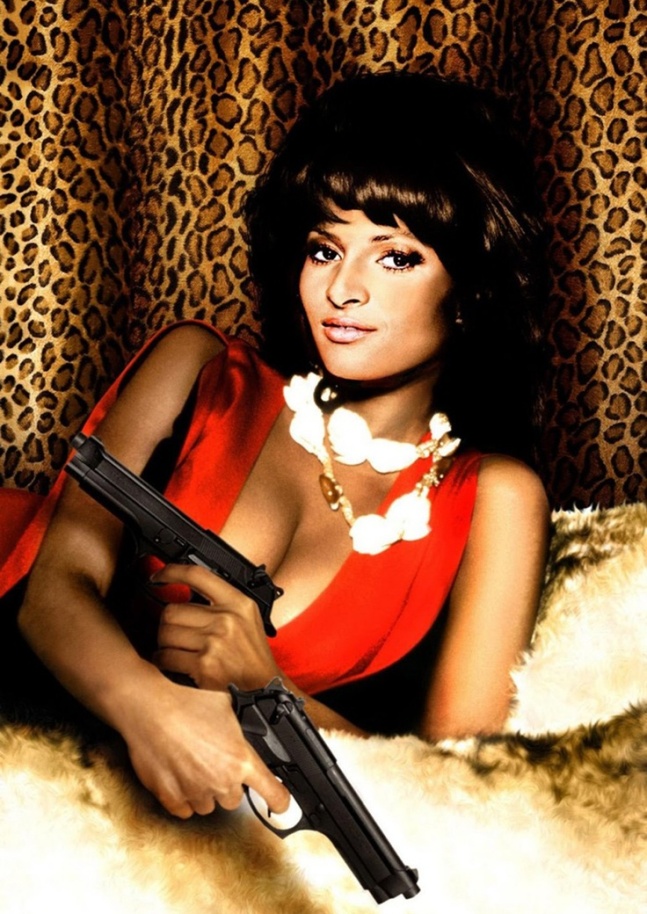 She published her memoir Foxy: My Life in Three Acts eight years ago. Grier said a biopic is in the works for her story to appear on the big screen. Actor and former Saturday Night Live cast member Jay Pharoah has been selected to portray Pryor in the film so far.

Grier provided film students with advice and emphasized to the audience that we’re all brands.

“I started creating a brand by showing different types of women and not just the sexy and pretty ones,” she said. “I don’t want to fall behind the comfort. I want to be the antagonist and crazy person. There are so many roles that I want to do. I want to play my age, but a lot of it isn’t seen. Film festivals and schools are inspiring all of these new narratives and stories. The inspiration is during the film festivals across the country because they keep developing and sustaining the brands of the actors, producers and directors.”