I felt like I was experiencing an arts extravaganza in New York City, Los Angeles, Chicago or another big city in the United States or across the pond this past weekend. I’m happy to report that the phenomenon was in O-town. 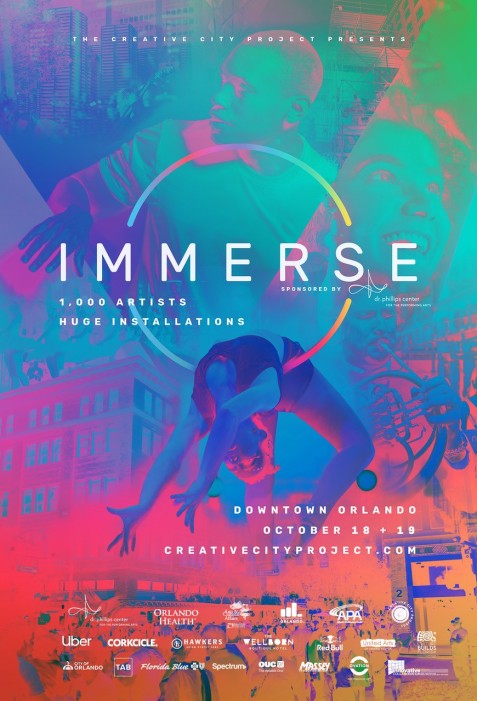 IMMERSE, which featured more than 1,000 artists from 140 arts groups this year, is organized by Creative City Project’s Founder and Executive Director Cole NeSmith. He wanted to introduce folks to music, dance, design and visual art that his friends were creating and decided to organize an event in a public space in downtown Orlando in October 2012.

IMMERSE has evolved and become an international arts showcase.

“We’re committed to making IMMERSE a destination event for people from around the world and an event that makes Orlando residents proud,” says NeSmith.  “Year after year, we have the opportunity to partner with Central Florida arts organizations to create unique performances. We love collaborating with artists to create innovative arts experiences audiences can’t have anywhere else in the world.”

IMMERSE featured aerialists and dancers telling stories through their movement and cultural outfits. 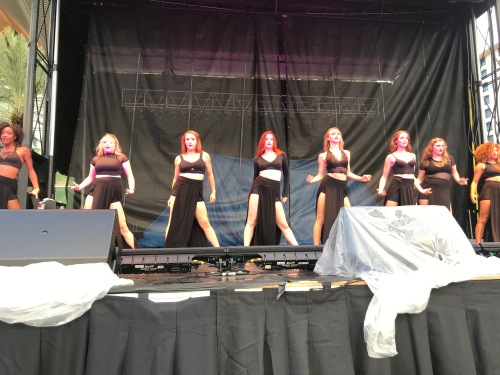 REVolutions Dance paid homage to women during its performance. 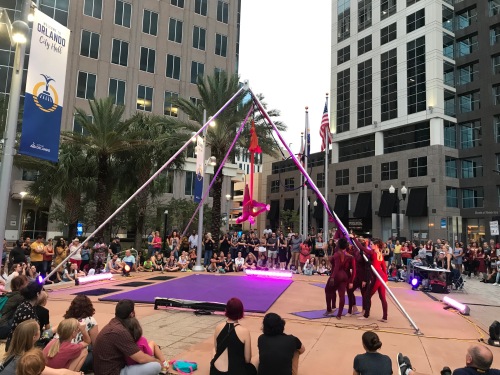 Dan and I enjoyed watching performing-arts groups on various stages throughout downtown Orlando, but we were enthralled with acrobatic dance troupe DIAVOLO, which was like watching architecture in motion.

The LA dancers wowed audiences during the 12th season of “America’s Got Talent” and earned a spot in the top 10.

The dance company made its IMMERSE debut by performing “Trajectoire,” a visceral and emotional journey on a 3,000-pound boat constructed of wood, aluminum and steel. 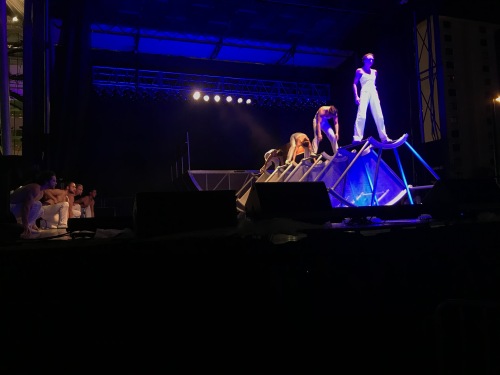 DIAVOLO takes the audience on a voyage during its “Trajectoire” performance.

The dancers struggle to find their balance on a voyage of destiny and destination while performing acrobatic moves on a moving vessel and show the transcendence of the human soul against all odds.

DIAVOLO is architecture in motion during its “Trajectoire” performance.

Another highlight was the Blue Man Group whose concerts are overflowing with percussive synergy. The magnetized crowd was digging the cobalt-blue trio’s colorful vibe as they created artwork with paint balls, painted a spectator after they had him put on a white jumpsuit and sprayed the audience with white confetti.

An audience member becomes a work of art during the Blue Man Group’s performance.

IMMERSE attendees had a chance to create a floral crown during the festivities. 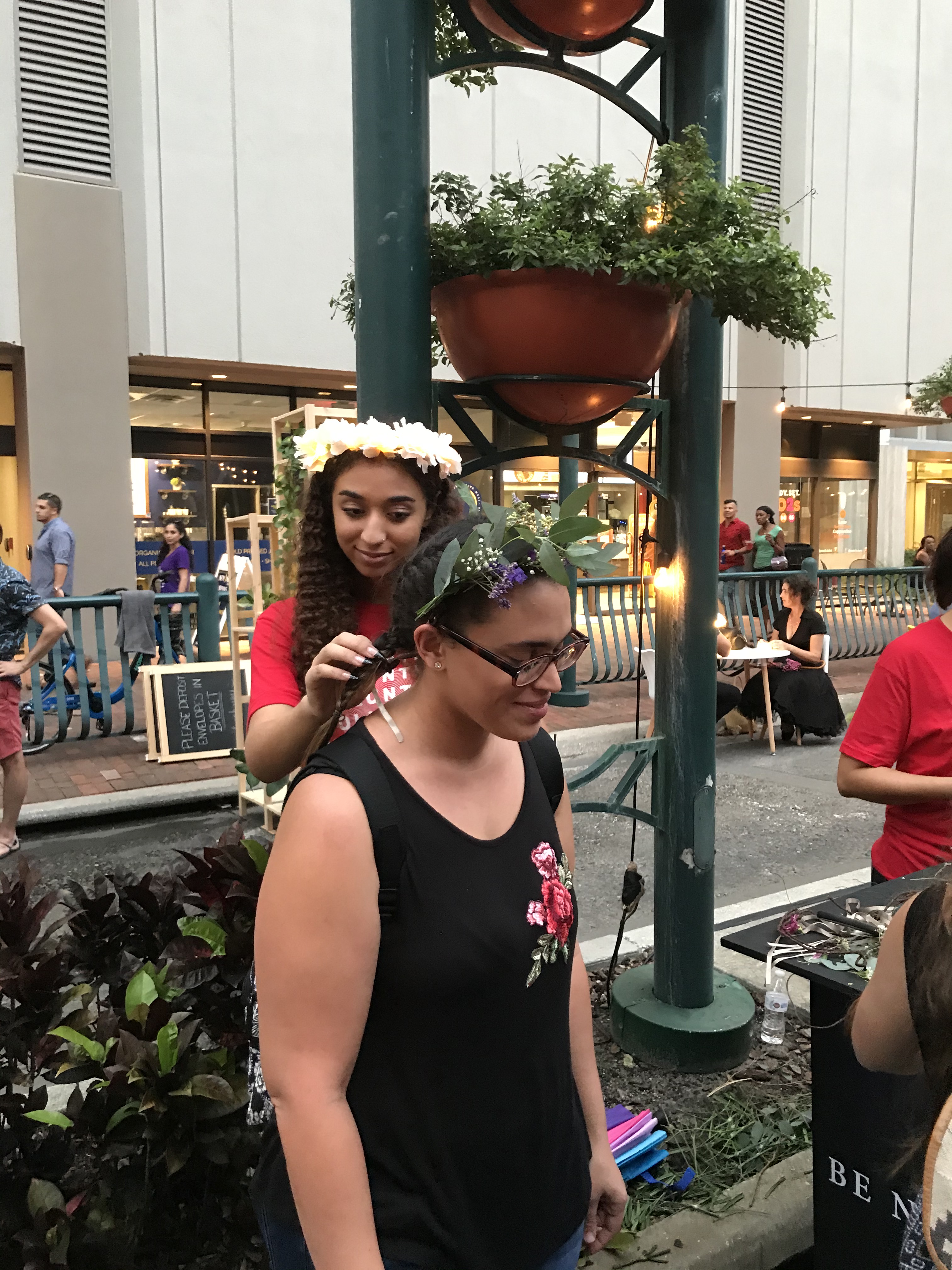 Participants interacted with hundreds of stringed light bulbs during the OUC Lights exhibit.

I’m striking a pose with the OUC Lights during IMMERSE!

Guests had a chance to meet someone new during Table Talk. 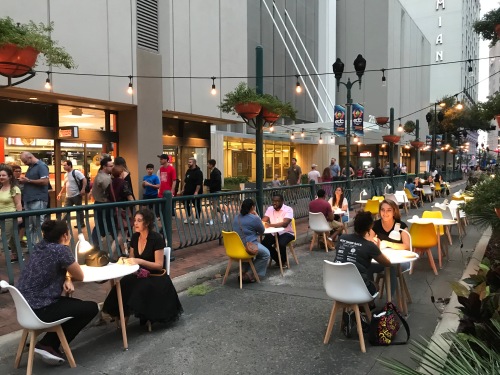 Attendees had an opportunity to chat up other IMMERSE participants during Table Talk.

The Cigna Foundation sponsored the Feeding Children Everywhere’s “Everyone Matters” interactive sculpture. Attendees had an opportunity to stand on 1 of 12 pedestals. Once all pedestals were activated, the sculpture illuminated with dancing light. 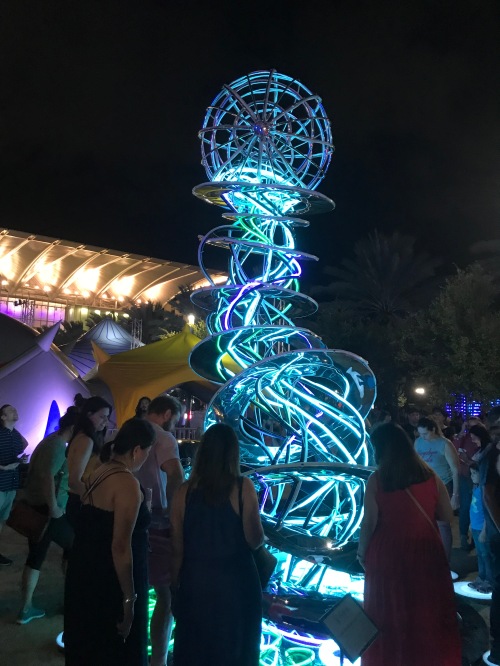 The “Everyone Matters” interactive sculpture reminds us that together we can do more than any of us could ever do on our own.

Hawkers Asian Street Fare created a tasty, immersive experience with its “Senses of Asia.” The walk-through exhibit provided guests with a chance to smell, hear, see and touch. Dan and I smelled ginger, herbs and spices and heard food being cooked in hot oil and the clanging of a metal spatula as it flipped food on a wok. Attendees had a chance to purchase the restaurant’s Asian delicacies next to the display. 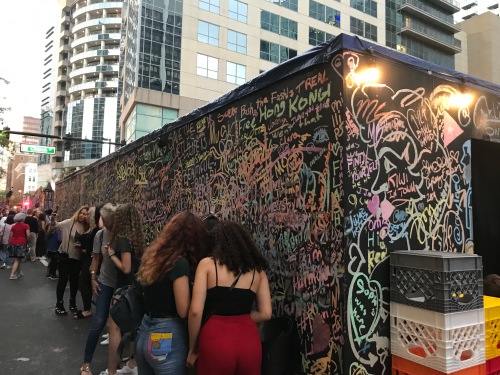 Attendees drew art and wrote sayings in chalk on the outside of Hawkers Asian Street Fare’s “Senses of Asia” exhibit.

Dan is immersed in the “Senses of Asia” exhibit.

The “Senses of Asia” exhibit had a photo-op area, which resembled an Asian market at night.

Attendees had a chance to touch and smell Asian vegetables and fruit.

The Orlando Science Center’s volcanic eruption was a hot hit during IMMERSE! The science museum promoted its “Pompeii the Immortal City” exhibit, which runs from June 6-Sept. 7, 2020. Orlando is one of four cities selected to display this historic exhibit.

Visitors will experience the destruction of Pompeii and identify the inhabitants of that time, immobilized by ashes after Vesuvius erupted in 79 A.D.

The Orlando Science Center promoted its “Pompeii the Immortal City” exhibit during IMMERSE.

Guests were striking a pose on various decorative sets that featured lighting, projection and special effects in eight shipping containers during “The Worlds of Corkcicle” at the Dr. Phillips Center for the Performing Arts’ Seneff Arts Plaza.

“The Worlds of Corkcicle” provided guests with a chance to take a photo at Instagram-worthy spots.

Mother Nature wasn’t kind to Architects of Air’s luminaria and immersive sculpture “DODECALIS,” which is adjacent to “The Worlds of Corkcicle.” The late-night rain storm on Friday evening caused the interactive exhibit to be closed on Saturday.

A volunteer let me know that I could return to experience “DODECALIS” next week. I stopped by on Sunday and felt like a kid again.

The luminarium has five domes that resemble connected bounce houses. The light shines through the domes’ panels. When you look up at the ceiling, you can see different colored shapes, which add to the zen-like ambiance.

The red dome in Architects of Air’s “DODECALIS.” 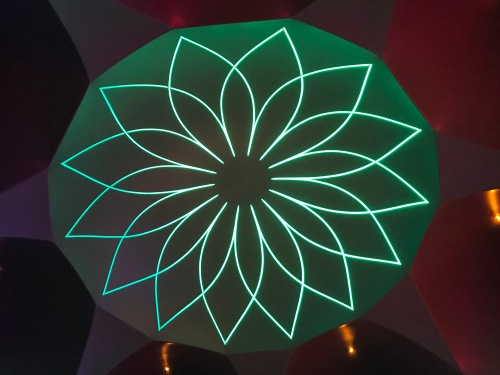 A flower-shaped design in the Architects of Air’s “DODECALIS.”

Participants relax in the Architects of Air’s “DODECALIS.”

The top of the “Tree” in Architects of Air’s “DODECALIS.”

Guests who have their VIP wristbands from Saturday night can experience the huge, illuminating inflatables and “The Worlds of Corkcicle” at the Dr. Phillips Center for the Performing Arts’ Seneff Arts Plaza through Saturday, Oct. 26. Visit creativecityproject.com for times. Tickets cost $17 if you don’t have a VIP wristband.

Dan and I were blown away by IMMERSE! I’m a native Orlandoan, so I can truly say that Orlando has come a long way.

Add IMMERSE to your bucket list and make it happen next October because you will be inspired and touched by the enormous amount of artistic talent in the City Beautiful.