Anecdotes and experiences of growing up in Baltimore, Md. and making movies were shared by legendary director Barry Levinson during the 21st Annual Florida Film Festival. The Academy Award-winning director, screenwriter and producer has brought visions to life in his films, including Rain Man and Bugsy and was honored and presented with the John M. Tiedtke Lifetime Achievement Award by the Florida Film Festival.

Fans watched Levinson’s film Liberty Heights (1999), a story about two Jewish brothers growing up in Baltimore in 1954, which explores race, anti-semitism, class and religion during that era. Levinson said during a Q&A following the film that he was fond of Liberty Heights  but felt it wasn’t recognized since there was a change at Warner Bros. when the movie was released. He also said it got lost [at the studio] and didn’t get the push it deserved and received very little publicity. Out of all four of his Baltimore films, it was the most neglected and wanted the Florida Film Festival’s audience to have an opportunity to see the film on the big screen.

Writing Liberty Heights was an adrenaline rush and took three weeks for him to finish the screenplay. Levinson doesn’t use  outlines but when he gets an idea in his head, the visualizations come to life and he continues to write until the end. Levinson also explained that when he writes a character’s dialog the word flow is like taking dictation.

His cousin Eddie was one of his inspirations for many of his Baltimore films, including the scene in Liberty Heights where the character Ben Kurtzman dresses like Adolf Hitler for Halloween. He also shared seeing James Brown in concert with a friend like Ben Kurtzman and Sheldon did in the movie. 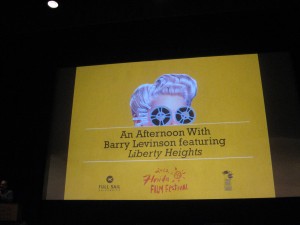 An Afternoon with Barry Levinson at the 21st Annual Florida Film Festival.

Levinson studied broadcast journalism at American University in Washington, D.C. and later moved to Manhattan Beach, Calif. He met George Jung in 1968 and they became roommates. Jung talked Levinson into attending an acting school in Hollywood, Calif. He wasn’t interested in acting and only wanted to watch but the instructor said he had to participate in the exercises and produce coursework.

The acting school changed Levinson’s life but Jung was bored with the class. Levinson enjoyed the acting classes and decided to move to Hollywood to be closer to the school. The acting classes provided Levinson with a well-rounded background in his new profession. Improvisational exercises led to writing and helped him understand directing. He also observed how actors function, which provided him with the skills to write a screenplay.

He always wondered what happened to his old pal Jung and found out after watching Blow (2001) that he established the American cocaine market in the 1970s and was the biggest cocaine dealer in North America. 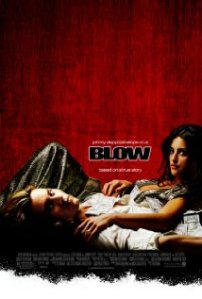 After acting school, Levinson wrote several TV variety shows, including The Tim Conway Show and The Carol Burnett Show. His first movie, Diner (1982), was based on growing up in 1959 Baltimore.

Levinson said his process is based on instincts, which take over and he just goes with it and has a sense of how the set and scenes are supposed to look like in a film. If he can walk into a space and immediately know how it works, then that must be the place but if he’s at a location where he can’t figure it out, then something’s wrong and it’s not going to work. He uses that method as a rule of thumb in film making.  Levinson also doesn’t like rehearsing and prefers letting the movie find itself rather than telling actors what to do. If he controls freedom within a small space, then the cast feels like they’re free to do almost anything but they can’t because of the location’s limitations. 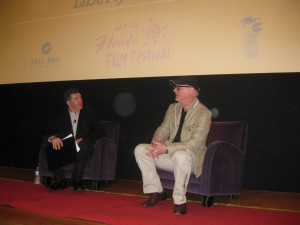 Barry Levinson during a Q&A discussion at the 21st Annual Florida Film Festival.

At times, writing about anything that’s close to you is harder than you think. Sometimes you have to step away from the story or not be attached at all. I asked Levinson if writing about Baltimore, which is near and dear to his heart difficult or just another script. He said writing about Baltimore wasn’t hard and there were no bumps along the way.  However, Levinson said he had an eerie experience when filming Tin Men (1987), a movie about competing aluminum-siding salesmen in 1960s Baltimore.

The film’s production designer was looking for a house with shingles because those were the aluminum-siding salesmen’s customers and that’s how they made their money. Levinson told the set designer to go to the house where he grew up in Baltimore. He knew the family that bought his parent’s home but didn’t know it was sold with all of the furniture. Levinson walked into the house and said it was surreal because it looked as it did when he left for college, including his room with a black door on the third floor. The door was black because no one was allowed into his room when he was a teenager. The room was the same except his mom had removed the football pendants from the walls.

He also got goosebumps when looking at period cars parked and extras in place on his street. He said it was exactly the way it looked the last time he was there because he never went back to his childhood home when he left for college because his parents sold it.  Levinson re-created his last, fond memory of being in his Baltimore home.  He said it was a strange feeling because he was stepping back in time. But his time capsule from the past has taken audiences on a trip that has been worth while and will never be forgotten.