Director Robert Altman’s Academy Award-winning film Gosford Park is a period piece about the rich and their servants during a British weekend retreat and party in 1932. Character actor Bob Balaban produced and portrayed an American vegetarian filmmaker Morris Weissman in the movie. The film was nominated for seven Academy Awards and won one Academy Award for Best Original Screenplay.

My husband Dan and I attended an evening with Bob Balaban, featuring Gosford Park during the 24th Annual Florida Film Festival.

The film was screened during the 24th Annual Florida Film Festival before a question-and-answer session with Balaban. Altman and Balaban came up with the idea for the film and brought it to life with an ensemble cast, including Academy Award-winning actress Helen Mirren (head servant Mrs. Wilson) and Maggie Smith who portrayed the wealthy Constance Trentham and is now Violet Crawley, Dowager Countess of Grantham on Downton Abbey.

An Evening with Bob Balaban
Photo by: Sandra Carr

Balaban had been reading Agatha Christie murder mysteries and came up with an idea for a movie, which became Gosford Park. He thought Altman would be the perfect director for the movie. Plus, Altman had a vast body of work but had never directed a period film during his career. Balaban said he knew it would be interesting because of Altman’s “lack of interest in formal structure.” Altman agreed to direct the film but he wanted “to do a murder mystery about poor people in England because he really didn’t like rich people.” He felt “everyone should be equal and didn’t like a division between rich and poor and the powerful and non-powerful.”

Last minute changes also added to the movie’s story and ending. Altman decided to have Jeremy Northam portray Welsh composer and actor Ivor Novello. Northam learned how to play the piano and sang in the film. Altman also decided to change the ending by revealing that Mrs. Wilson and Mrs. Croft (head servant) were sisters.

Besides acting, directing and producing Gosford Park, Balaban has a movie theater and film-making heritage. His mom Elenore acted under the surname Barry and his dad Elmer Balaban owned movie theaters in Chicago and throughout the Midwest, and developed an early version of pay-TV. His uncle Barney Balaban was also the chairman of Paramount Pictures.

Bob Balaban participates in a Q&A during the Florida Film Festival.
Photo by: Sandra Carr

He was Linus in the off-Broadway production of You’re A Good Man, Charlie Brown but his first movie role was portraying a young student in MIdnight Cowboy.

At age 69, he has portrayed more than 100 characters, including the interpreter David Laughlin in Steven Spielberg’s science-fiction film Close Encounters of the Third Kind.

Bob Balaban and François Truffaut in Close Encounters of the Third Kind.

He has been in Christopher Guest movies, including Waiting for Guffman, Best in Show, A Mighty Wind and For Your Consideration.

Bob Balaban as Jonathan Steinbloom in A Mighty Wind.

The actor is also renowned as the character Russell Dalrymple, the President of NBC who was obsessed with Elaine on Seinfeld.

He has also had the opportunity to appear in Woody Allen’s Deconstructing Harry and Fading Gigolo.

Balaban was the narrator in Wes Anderson’s Moonrise Kingdom and the Ritz Imperial concierge in The Grand Budapest Hotel. I had an opportunity to ask Balaban about what it was like working with this writer, director and producer and why his quirky, signature style was so unique.

“I have been lucky during my lengthy film career,” he said. “I have worked with some amazing people and stumbled upon some wonderful directors. I have always loved Wes’ movies. I was thrilled when he asked me to be in Moonrise Kingdom. I loved the script, my part and working with Wes. He’s a brilliant and unique director. There’s a real ballet going on with Wes’ shots and the actions in them. It’s so formal but his films are life filled to me. He has a love of children and respects the dignity of all sorts of people in is movies. He thrives in chaos but his movie making is very organized with a vision that he’s able to get on the screen.” 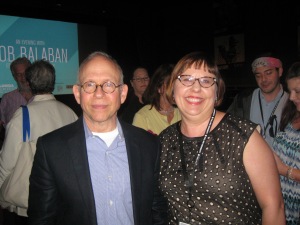