ICEBAR Orlando is renowned as the largest, permanent ice bar in the world with more than 70 tons of hand-carved ice. The bar’s original owners Patz and Ron Turner decided to be bold with the cold when they opened the ice bar along the International Drive corridor 12 years ago. 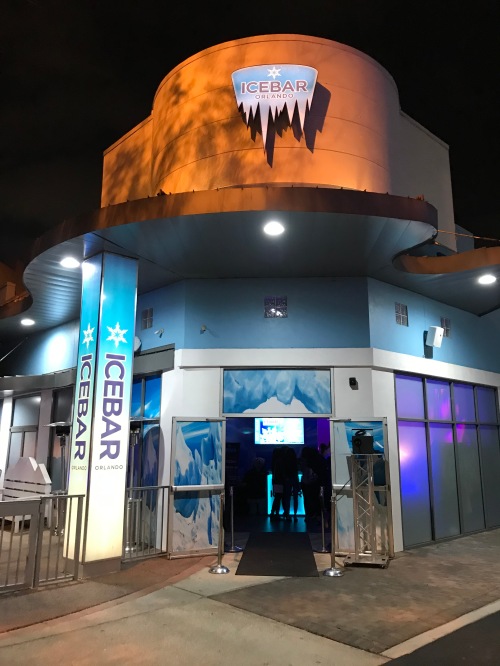 ICEBAR Orlando is located along the I-Drive corridor. Photo by Sandra Carr.

A lot has changed since I first visited ICEBAR Orlando during a media event before its grand-opening celebration in October 2008.

Some of the changes include renaming the Chill Lounge to the Fire Lounge.

The Fire Lounge’s bar looks the same. However, the bar area is more open and spacious with comfy couches for lounging and chatting and small brushed-aluminum-looking tables instead of white square-shaped high-tops. The bar also has a relaxed ambiance with counters and bar stools and small high-top table areas that are against the wall instead of situated on the main floor. 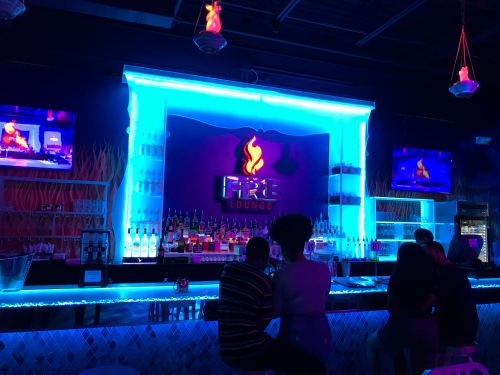 The Fire Lounge at ICEBAR Orlando. Photo by Sandra Carr. 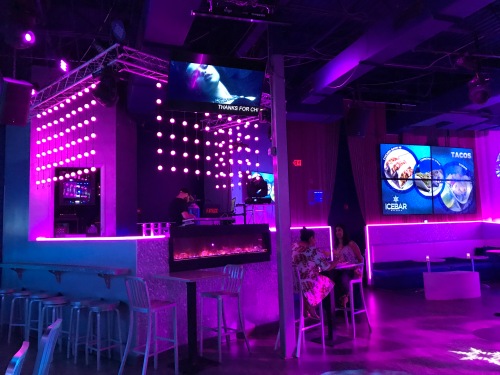 A DJ spins the beats while clubgoers hang out and chat at the Fire Lounge. Photo by Sandra Carr.

The 1,375-square-foot, air-locked ice bar has new sculptures and a longer bar, which is a plus. The venue has also updated its thermal coats. The original thermal coats were gray hooded parkas with the bar’s logo. I’m happy to report that you can now wear faux fur coats for an additional $10 with gloves during your Arctic expedition!

I’m wearing a faux leopard thermal coat and gloves while posing with a cute penguin on a polar bear ice chair sculpture at ICEBAR Orlando. Image courtesy of Sandra Carr. 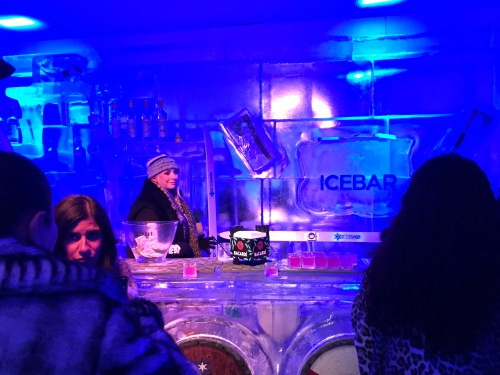 A bundled-up bartender is ready to serve you at ICEBAR Orlando. Photo by Sandra Carr. 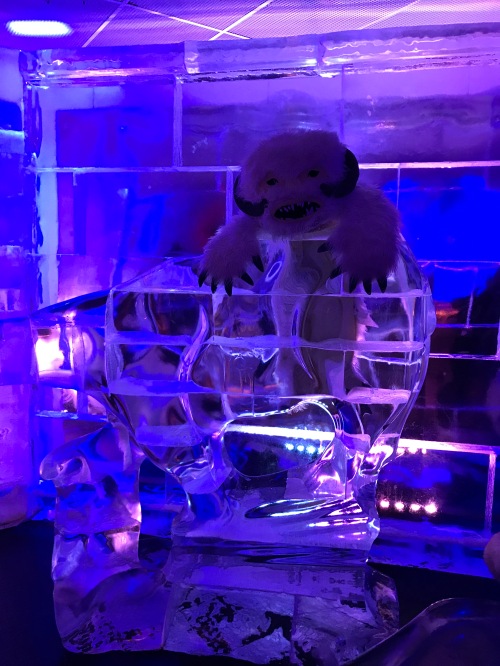 A yeti guards an ice sculpture at ICEBAR Orlando. Photo by Sandra Carr.

I enjoyed the ice bar’s 20-degree temperature, which provided necessary relief from the nearly 90-degree weather outside! 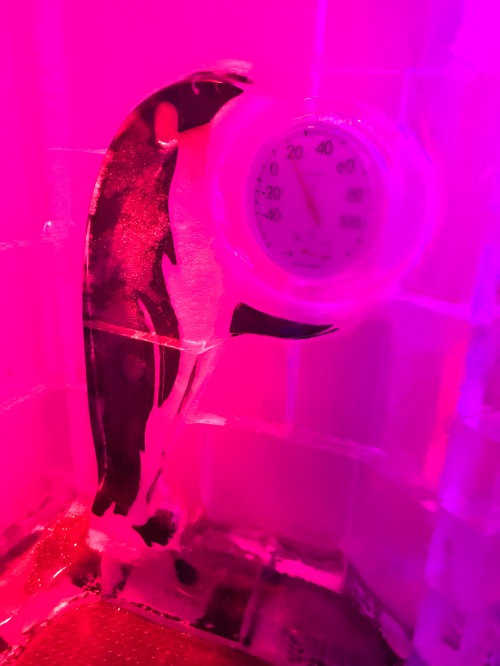 Feel the chill at ICEBAR Orlando. Photo by Sandra Carr. 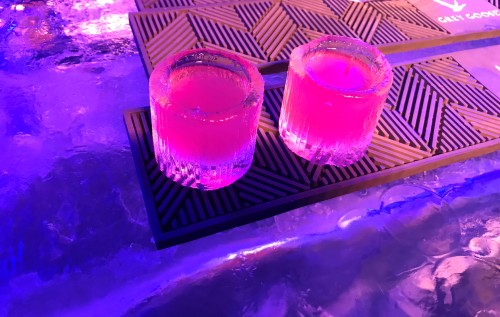 Thomas Kerr became ICEBAR Orlando’s new owner in May 2019 and is responsible for the cool changes, including Fire Lounge’s expansive munchies menu and innovative cocktails.

I had an opportunity to sample delicious dishes and drinks served by attentive servers during a media tasting event last Thursday night. The first course was a Fig and Goat Cheese Flatbread paired with a Toasted Coconut Martini. I was in heaven while chowing down on this sweet and savory snack that can feed two people. The yummy flatbread included a sweet fig preserve, light goat cheese and prosciutto and was topped with fresh arugula and balsamic fig glaze. 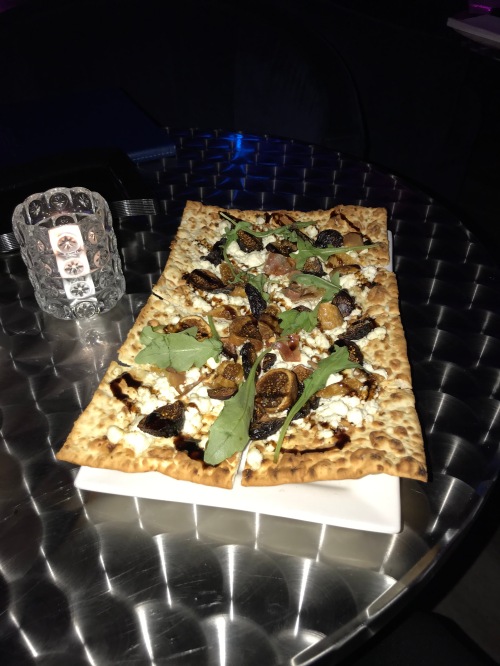 The Fig and Goat Cheese Flatbread at ICEBAR Orlando is flavorful and filling. Photo by Sandra Carr.

I also sipped the refreshing, Zesty Spritzer, which is the perfect drink during a hot, humid day in Orlando. The cocktail’s ingredients include Tanqueray Sevilla orange-flavored gin and sugar and topped with champagne and an orange twist. 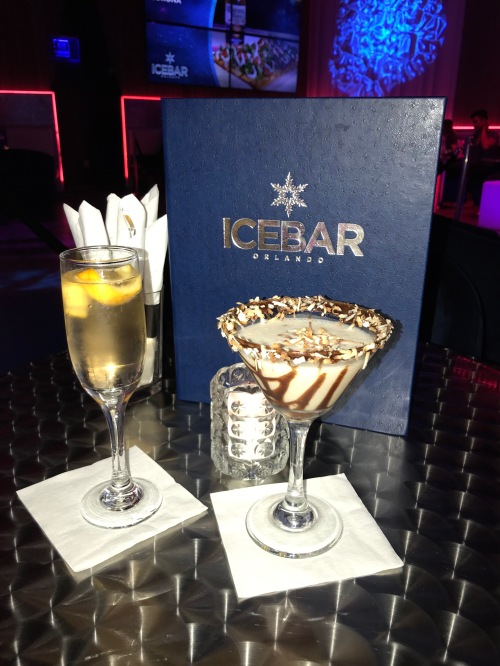 The Zesty Spritzer and Toasted Coconut Martini are served at ICEBAR Orlando. Photo by Sandra Carr.

The next dish was a soft taco trio, which included a Shrimp, Banh Mi and Chimichurri Steak Tacos. I felt like I was in the fairy tale “Goldilocks and the Three Bears” while tasting these three tacos. The Shrimp Taco included a good-size serving of blackened shrimp topped with marinated cabbages, tropical salsa and a chili lime sauce, which gave the taco a kick. The Banh Mi Taco’s flour tortilla was stuffed with Vietnamese marinated chicken, tangy pickled vegetables, cilantro and a drizzle of homemade, spicy mayonnaise. The Chimichurri Steak Taco featured chimichurri-seasoned steak with marinated cabbage, cilantro cream and a green, Argentinian chimichurri sauce. I have a mild palate, so the Shrimp and Banh Mi Tacos definitely woke up my taste buds! The Chimichurri Steak Taco was mellow in comparison and more my speed. 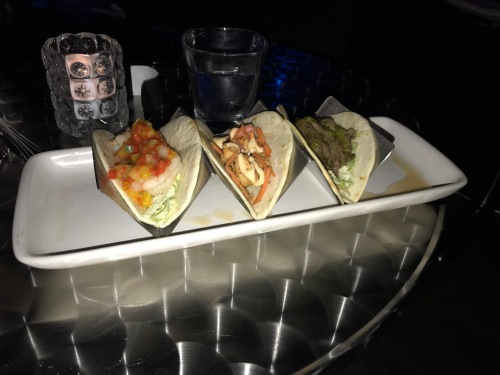 Test your senses with the Shrimp, Banh Mi and Chimichurri Steak Tacos at ICEBAR Orlando. Photo by Sandra Carr.

China meets Philadelphia with ICEBAR Orlando’s Philly Rolls. The fusion cuisine modernizes the Philly Cheesesteak by replacing the hoagie roll with a baked and crispy wonton wrapper packed with shredded ribeye steak, onions, peppers and provolone cheese. Creamy Sriracha sauce is available on the side. I preferred to eat my Philly Rolls without the sauce, but clubgoers have options! 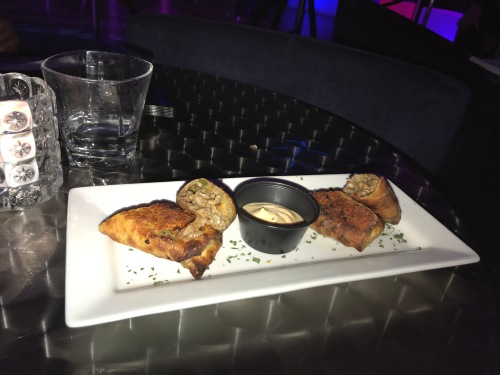 This creative appetizer was tasty and paired nicely with my Melon Fizz cocktail, which included Bacardi coconut, melon liqueur, pineapple juice and a cherry. The green concoction tasted like a tropical drink with dry ice coming out from the top of the highball glass, which was an amazing effect. 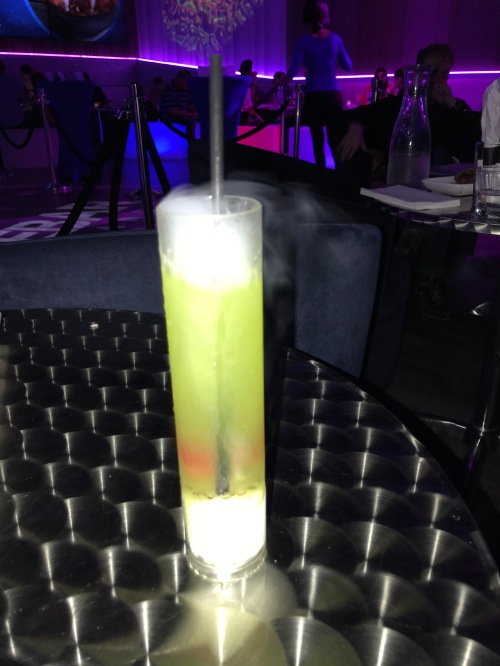 The Melon Fizz is a delicious, tropical cocktail and science experiment rolled into one. Photo by Sandra Carr.

The culinary journey continued with hearty Meatball Sliders, which include large, sliced Italian meatballs topped with marinara sauce and melted provolone cheese on a hamburger bun. 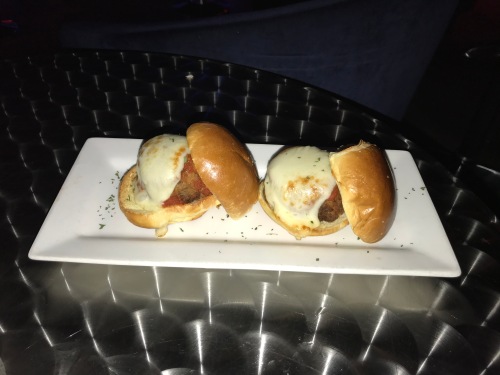 The Meatball Sliders are a tasty and filling appetizer. Photo by Sandra Carr.

The Patrón Pineapple Margarita was fruity, but had a strong, Patrón tequila flavor. I’m not a big tequila drinker, but agave aficionados will find this margarita delightful. The drink features Patrón tequila, triple sec, pineapple and lime juices and is garnished with fresh orange and lime wedges and a sugar or salt rim.

The Ice Queen takes charge with Bombay gin, passion fruit puree, sour mix and soda water and a rock candy skewer, which was a sweet sidekick. 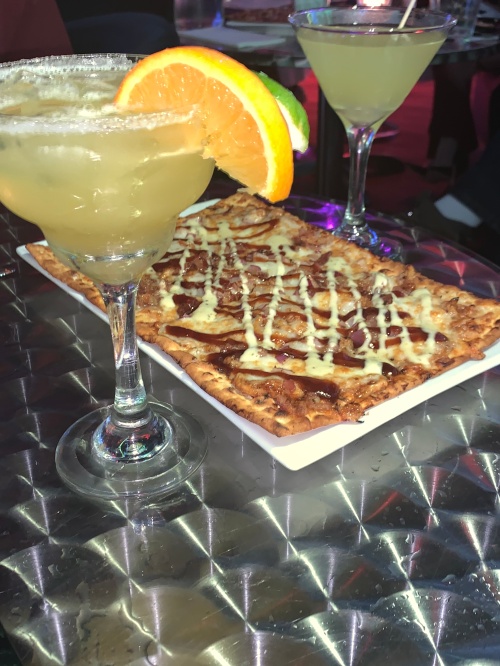 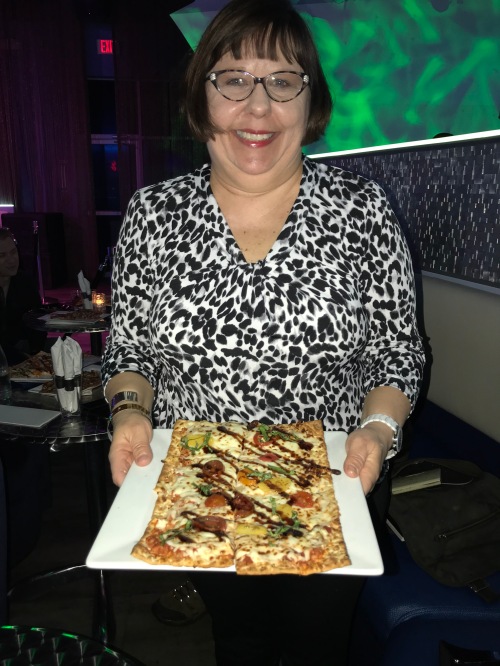 The new cocktail menu featured two additional drinks that are not included visually in my blog. The Bourbon Street sounds like a modern Old Fashioned, which includes Bulleit bourbon, sugar, fresh lemon, a splash of sour and Merlot wine float topped with a black cherry garnish.

The Pear Moscow Mule includes Grey Goose La Poire Vodka, lime and ginger beer. Both of these cocktails sound like girly versions of manly concoctions that I’m sure are worth a shot!

If you have never visited an ice bar in a foreign country, then here’s your chance to take the plunge at ICEBAR Orlando. The ice bar and Fire Lounge are open Sunday through Wednesday from 5 p.m.-midnight; Thursday from 5 p.m.-1 a.m.; and Friday and Saturday from 5 p.m.-2 a.m. Ages eight and older can experience ICEBAR Orlando from 5-9 p.m. and 21 or older take over after 9 p.m.